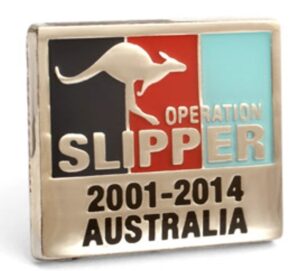 Operation Slipper Australia Lapel Pin order now from the military specialists. The history of Operation Slipper and Australia’s fight against terrorism across the Middle East and Afghanistan will always recount the pride all Australians feel for those service men and women who answered the call. The fight against terrorism has drawn Australia into its longest war, and through 13 years of conflict the community has steadfastly shown support and respect for the men and women on the ground.
About the pin
The Operation Slipper Australia Pin is created in the tradition and style of Australian military service patches. The underscoring tri-service colours set in the Silver-plate face represent the strength of the Australian Defence Force’s commitment, while the bounding kangaroo, adopted in patches across all Services is presented in Silver, rather than the more common military red, to acknowledge the non-combatant support which contributed to the operation. The pin face measures 22mm by 16mm and is finished in a protective epoxy coating. It fixes with a pin and butterfly clasp and is presented on a versatile fold out display card.