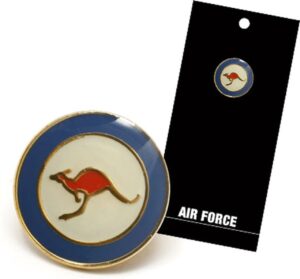 When the Royal Australian Air Force was formed on 31 March 1921, it adopted the existing red, white and blue Roundel of the Royal Air Force to identify the aircraft. However the red inner circle was removed during World War II, when an 11 Squadron Catalina was mistaken for a Japanese aircraft by a United States Navy Wildcat. After the war the red was re-introduced, but on 2 July 1956 the Red Kangaroo ‘in motion’ was chosen as the most popular centre piece from a range of other options including the Southern Cross, a boomerang and a sprig of wattle. It has been displayed with pride, not only on aircraft, but on various promotional material ever since. The kangaroo within the Air Force Roundel always faces the left except when used on aircraft or vehicles, when the kangaroo should always face the front of the aircraft or vehicle. 15mm lapel badge